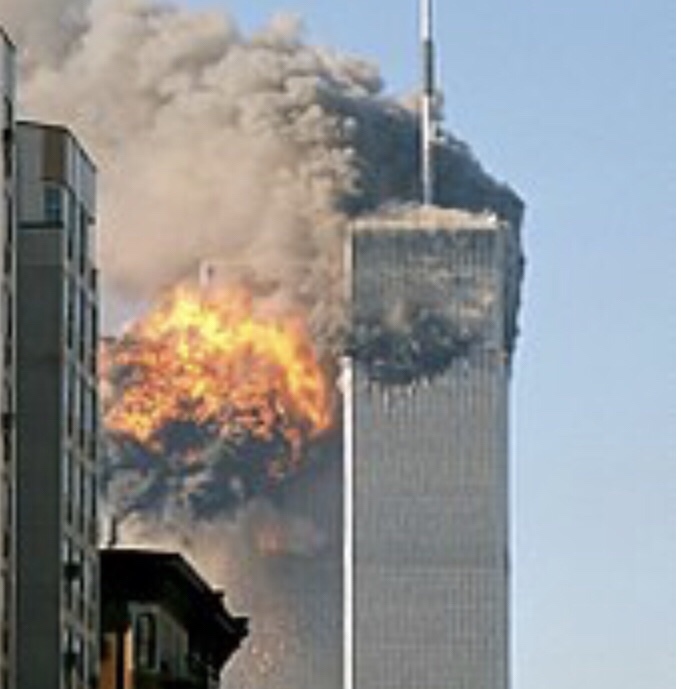 September 11, 2001 was a pivotal day for many Americans, including myself. I was 17 years old and a senior in high school, which is really weird for me now because my current husband was only 13 years old and in middle school. Of course we hadn’t even met and lived in different states, but that’s still weird looking back. Anyway, I remember every second of that day like it was yesterday because I was scared and uncertain in a way I’d ever been before. I only had a couple classes left to graduate by the time I was a senior and my tiny rural high school didn’t offer many honors courses, so I was participating in a work/study program that let me go to school half days and split my time between my last couple credits and my part-time job at the good old Golden Arches. Great program for people who prefer to make money instead of sitting in study hall for 6 periods a day!

On that day, 9/11/01, I was sitting in my geometry class when suddenly the teachers wheeled a TV in on a cart and turned on the news, saying something about a massive plane crash in New York. “What’s the big deal?” I thought to myself, “Planes crash all the time.” I had no idea how irreversibly my life was about to be changed. As we continued watching the footage, we learned that our very own country was under attack by terrorists who hijacked planes – planes full of innocent civilians- and flew them into the Twin Towers and the Pentagon in a murderous senseless rampage.

We actually watched the second plane hit the second tower live on TV, and that’s when it all hit home for me. I wanted to cry but I was too shocked. I wanted to get angry and vengeful, but I was still too shocked. I was frozen. America, in my eyes, had always been impenetrable, strong, my fortress. I feared for what would become of the rest of my young life if this was the defining event that would take me from adolescence to adulthood: a terror attack.

Later that day after my classes let out, I drove the back roads home in my ‘86 Mercury Grand Marquis (stylish grandma car), still reeling and wondering if I should be worried about dodging bombs or land mines. Just to break up the intense emotions that come up every time I discuss 9/11, here’s a fun throwback pic of me with that very car.

I had been so focused on my future, my college applications and career plans; what if this led to WWIII and I had no future? What if my life as I knew it was over? How would I reconcile the lives of thousands of my fellow Americans who were murdered senselessly? It was so overwhelming.

In the coming days, weeks and months, I did build a future for myself. In the spirit of brutal honesty, I felt bad that so many people lost their lives but I was still living mine, yet giving up didn’t seem like a good option. I chose my college and major, found a few part-time jobs I liked, and moved forward into my new adult life with trepidation. At that point, I wasn’t even sure if I’d live to see 30.

The other turmoil within me that was affected by 9/11 is my atheism. I had been pretty certain from a young age that I didn’t believe in a god, but I wasn’t ready to come out against religion yet because, where I come from, being against religion is seen as pretty much the equivalent of being a Satan-worshipper who sacrifices babies to the dark lord. In reality, I’m a good person who always does the right thing and loves to help people: I just don’t believe in a god or need one to motivate me to treat people right. Also, the whole Satan-worshipper myth is just silly because atheists don’t believe in Satan either.

When I realized that the terrorists who hijacked the planes did so for religious reasons, it changed the way I saw religion forever. I didn’t feel the dreadful obligation to revere religion as the only source of goodness and light in the world anymore, and that was a huge relief to me. How could I possibly be expected to put religion on such a pedestal when people used it as an excuse to murder thousands of innocent fellow humans who had families? I couldn’t. Finally I was free of my mental prison and I could start being myself. No religion, no hate or judgement, just love for my fellow humans and a newfound lifetime of fear about the likelihood of WWIII and the knowledge that its cause would most likely be a massive disagreement about whose invisible sky daddy is better.

I say that sarcastically because that’s how I deal with trauma, and 9/11 still traumatizes me to this day. Every time I think about it, I feel like that scared 17-year old again and it all comes rushing back. Can we at least learn some lessons from it? Like it’s fine to believe in your religion but not if your religion insists that you kill others for not believing the same thing. Like we should all bond together as Americans to secure our borders and protect one another. Like we’re all together in this and we’re all responsible for remembering 9/11 because those who forget history are doomed to repeat it.

R.I.P. to all my American brothers and sisters who lost their lives on that fateful day. To everyone else, please stand with me on this day to ensure that they’re never forgotten. Also, take a second to befriend someone who sees religion differently than you, because we’re really not all that different and what America needs more than anything else right now is unity. 🇺🇸