My first dog Miles has always been a bit clingy, and I can’t blame the poor guy. He was found wandering the streets of Wilmington hungry, neglected and possibly traumatized by having his tail cut off (although we sincerely hope he has a stubby tail naturally because we don’t condone animal abuse). He was in a foster home waiting to go to a good forever home, so it’s a good thing that my now-husband and I saw him on Craigslist and decided to adopt him.

We adopted Miles when he was 10 months old and he was the cutest puppy ever. When we met him, we had already planned to adopt him no matter what, so it was pretty convenient when he liked us at first sight as well. We put him in the car with his cozy new blanket and he fell asleep on the drive back to Cary. Just look at him! 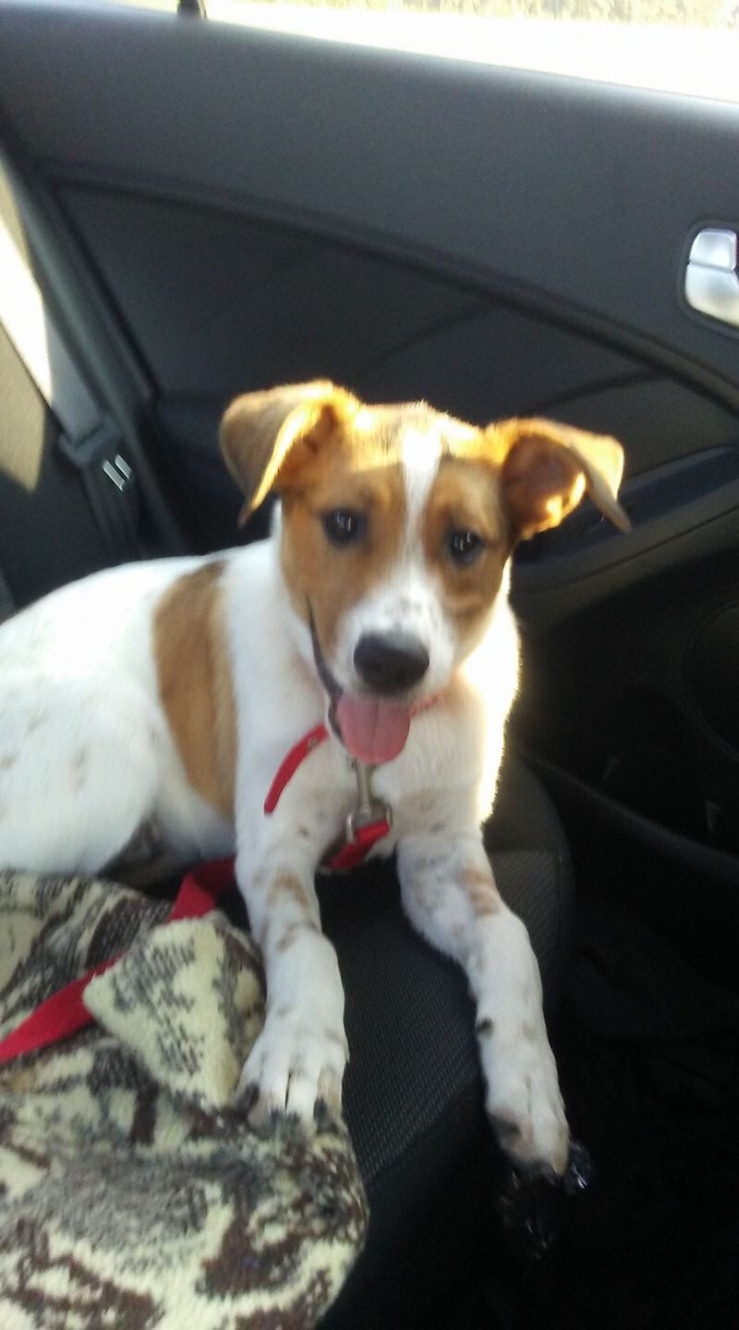 Miles was an extreme challenge when we first adopted him (still is) and I’m grateful for my husband being there to work through it with me. He really is a good boy though, and I’m not just saying that because I’m his mom. He’s a Jack Russell mixed with some larger breed, so he’s pretty much a 60-lb Jack Russell. If you’ve ever had a Jack Russell, you know about their high energy levels and insane jumping ability, even at 20 lbs (which is typically how much they weigh if they’re not mixed with a giant). He’s spirited and sometimes a pain in the ass but he doesn’t do it on purpose, it’s just who he is.

Miles is two now and he still needs to be constantly entertained, much like a toddler. He goes on a lot of walks and loves to chase his ball. He hates being left alone for too long, including overnight. Good thing for him, I’m a night owl and I’m usually up pretty late after my husband passes out at 9:30 (I make fun of him but sometimes I wish I had the ability to sleep at 9 fucking 30).

The time after my 30-going-on-70 year old husband goes to bed is now affectionately known as Mommy/Miles time. I usually turn on one of my favorite shows and Miles cuddles up next to me on the couch, always within an arm’s length so I’m not deterred from petting him. He rolls on his back and grins up at me until I scratch his belly. He naps on and off but always wakes up if he suspects I’m trying to sneak to the kitchen and get a snack without him. Yeah, he’s not going to let that happen.

I really like my Mommy/Miles time for so many reasons. For one, he’s adorable and unusually calm late at night. Also, he’s my fur son and that suits my lifestyle much better than human kids. If I had a two-year-old human son, he probably wouldn’t be up with me at 3 am, and if he was, I couldn’t watch my funny/raunchy shows full of profanity and general debauchery while also cuddling him. I’d be stuck watching fucking Sesame Street or whatever little kids watch these days. I mean, Sesame Street was great when I was 4 but now I’m 34 so I’m good on that.